In the following form you can request prices and information about our devices.

Simple, mobile, powerful. The power package.
Perfect for larger rooms up to 250 m² 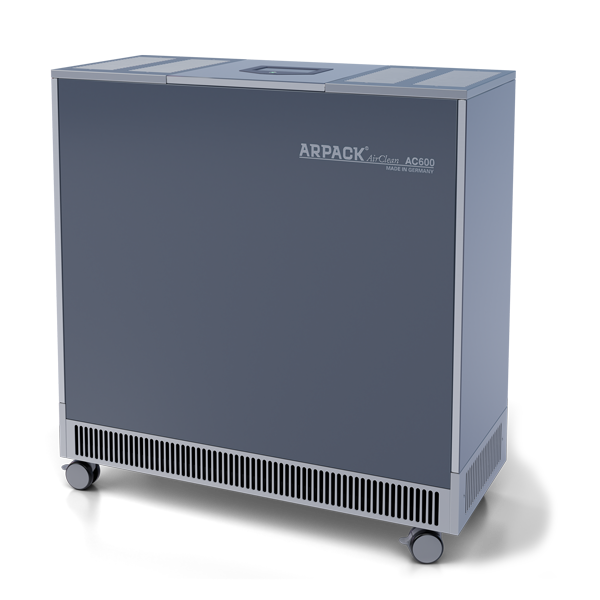 The ARPACK AirClean AC 600 is the flagship of the ARPACK AirClean family. With the two integrated high-quality F9 particle filters, the device not only removes contaminants such as bacteria, mould, pollen, odours and viruses, but also even fine dust as small as one micrometre.

This is exactly why the ARPACK AirClean AC 600 is particularly suitable for use in large areas such as kindergartens, schools, workspaces, restaurants, clubs or fitness studios.

A modern touch screen allows you to control the 5 power levels and integrated time preselection.

Technical data >
Available in the colours

This is done by oxidising organic contaminants (including pathogenic microflora) on ARPACK AirClean Technology photocatalytic filter elements, completely decomposing such contaminants into trace amounts of water vapour and carbon dioxide.

The technology behind the Arpack AirClean AC 600 cleaning device consists of the photocatalytic mineralisation of microflora and volatile organic compounds, which are treated on a working filter of nano-crystalline titanium dioxide, under the influence of a “soft” UV-A radiation (315 nm – 400 nm).

Technical data of the AC 600

Our air purification devices have been tested and their effect confirmed by renowned institutes and laboratories.

The main types of volatile organic compounds that are removed by our units include: